About Innis Looby Cycling Tours:
Are you looking for a challenge or just want to ride some amazing and beautiful roads, The French Alps has to be one of the most beautiful places to cycle even the days with bad weather. Most of our tours will be based in France but only a few minutes cycle and we are in Switzerland so between the Swiss and French Alps you will be able to meet what ever challenge you seek.

They have released the Route for the 2016 Tour De France, and I thought it might pass near enough to where we will be staying, with the hopes of it being close enough to go and ride part of the course and see the them pass but to see they will be finishing in the town of Morzine is cool beyond words, if you coming you need to get your deposit in quick because this will defiantly be a moment you will not want to miss. The Innis Looby cycling Tour dates July 12th- 18th July 19th- 26th

Message from the BLB:
We were submitted this article from Innis and thought what he was doing with his tours are really cool so we did a little Google searching for more info on him and and discovered some great things about his background in cycling.

“I have worked in the cycle industry for over 20 years, working my way from a bike builder to workshop Manager and than store Manager.
My experience and knowledge is vast from selling bikes to repairing them.
I have ridden and race just about every type of cycle from recreation to Pro level

When I first entered into road racing, at the time I was very much into my BMX. When I made the change I still lived in Bermuda, as the island is small, I pretty much rode my BMX everywhere. Little did I know, riding that BMX as much as I did was laying a great foundation for my cycling (spinning) in the years to come.

I entered my first race on a bike I had pulled out of the dumpster at work (wheels cycles Bermuda) I asked my manager if I could have he said yes so fixed it up, it needed quite a bit of work, including welding of the frame before adding paint and than building the wheels (MA40 Mavic rims on 36 hole 4x Shimano 600 hubs) and had my first road bike.” ~Innis Looby 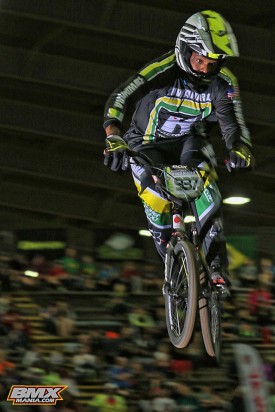